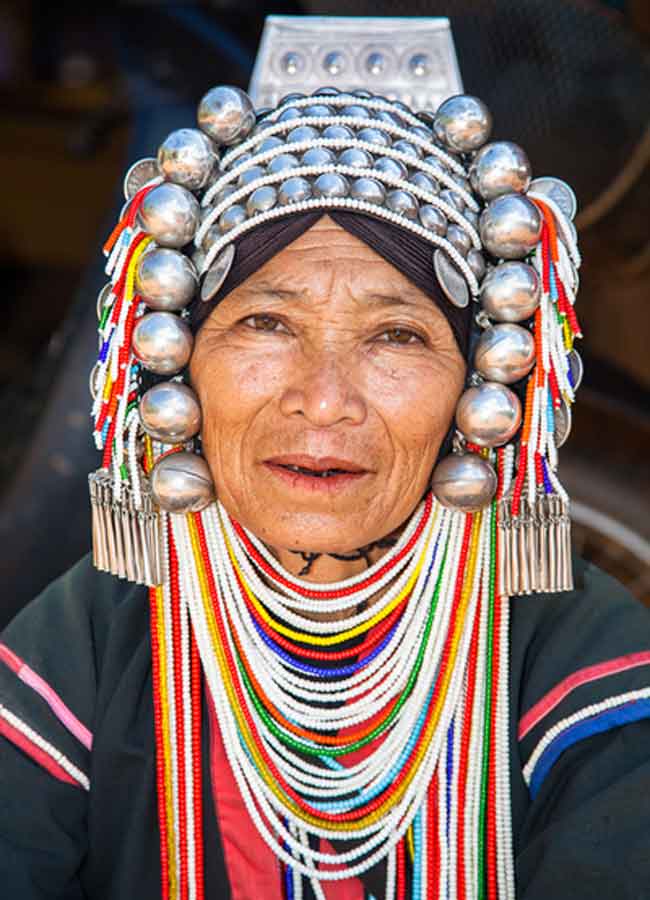 The Akha hilltribe, one of the 6 ethnic groups living in the mountainous northern provinces of Thailand, settled in Chiang Rai province several hundred years ago. Originating from Tibet, they migrated south to China then into Burma to escape war and famine. Then, to escape persecution by the army in Burma, they crossed the border into Thailand.

Today, the Akha people are settled in China, Burma, Lao, and Vietnam. They were self-sufficient, with a barter economy and lived off the land. They practiced swidden agriculture, relocating their villages every ten years or so to enable the land to regenerate. They believed in animism, respecting spirits in nature.

Twins were suffocated at birth because they were believed to be an abomination and extremely ominous. A spirit gate marked the entrance to every village, to ward off spirits from entering. Villages had a shaman to carry out rituals and animal sacrifices for the spirits, and a blacksmith to produce knives and tools.

The Akha had a vast knowledge of medicinal forest plants, and opium was grown for pain relief. Traditional knowledge and stories were passed down the generations as they sat around the fire, and men could recite their lineage, starting from the first Akha man. Bamboo was used to make everything from cutlery to baskets. A man could build a bamboo house without using a single nail and survive in the forest for a week with just a bag of salt.

Villagers used horses as pack animals. The men did the hunting and farming but the women had a heavier burden doing the cooking (plus gathering firewood) and child-rearing, as well as farming. The women grew, spun, dyed and wove cotton, and villagers would wake at dawn to the steady thump of the women de-husking rice using a heavy wooden rice pounder.

Next page - The Changes